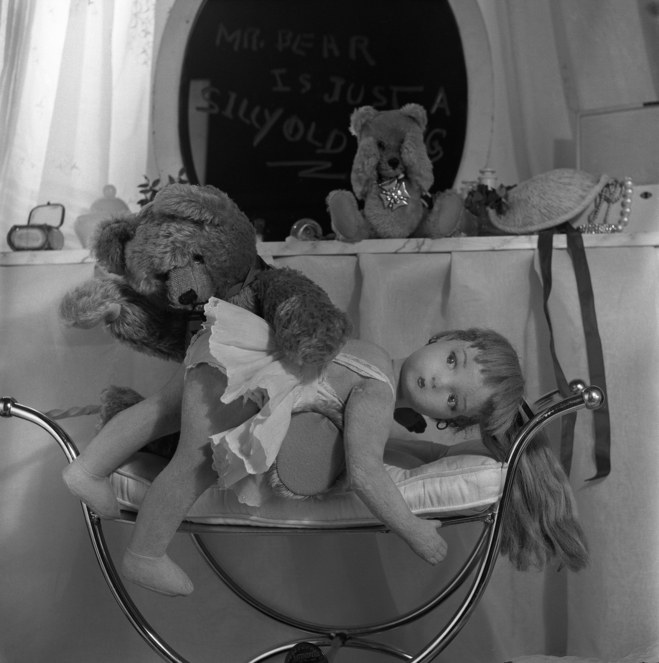 Photographer and author Dare Wright’s first children’s book The Lonely Doll was first published in 1957. It tells the story of a doll named Edith and is accompanied by photographic illustrations taken by Wright. Rebecca Bengal examines this unsettling children’s book, which went on to be a source of inspiration to Cindy Sherman, Kim Gordon, Anna Sui and Antonya Nelson.

A couple of years ago, when asked, “If any book made you who you are today, what would it be?” the musician Kim Gordon cited the children’s book “The Lonely Doll,” from 1957. “It was my first view, my first idea, of New York as a glamorous place,” Gordon, who grew up in Southern California, in the sixties, told the Times Book Review. “The Lonely Doll,” which is narrated in photographic illustrations composed by Dare Wright, tells the story of a doll named Edith, who lives all alone in a house, praying for company, until, one day, two stuffed bears show up and befriend her. When the elder Mr. Bear leaves on an errand, Edith and her companion, Little Bear, set off to explore the empty house together. The book’s cover is rimmed in a bright-pink gingham pattern, but, inside, the carefully staged tableaux are shot in black and white, the poses of the toys at once tender and eerie in their precise artificiality. Gordon admired the gingham apron the doll wore and “the general air of existential blankness” that pervades the book. “When I tried to read it to my daughter, Coco, I thought, ‘This is so dark and terrifying,’ ” Gordon said. “But I’ve met many women who were influenced by that book.”

Indeed, in the six decades since it was published, “The Lonely Doll” has become a cult classic, beloved especially among a generation of women artists. The writer Antonya Nelson, who used to read the book to her little sister, has a short story in which a character named Edith describes “The Lonely Doll” to a man she’s just slept with—the “stilted” poses of the doll and bears, “committing the crimes of toys, punished eventually by an even bigger plaything named Mr. Bear, who bent the doll and little bear over his knee and spanked them with his paw.” “It spoke an ugly truth that made sense to me,” Nelson told me recently. The fashion designer Anna Sui, whose iridescent baby-doll dresses ignited her career, reportedly spent a decade tracking down a copy of the book, which she remembered from childhood. (First editions can fetch hundreds of dollars.) Cindy Sherman, writing about “The Secret Life of the Lonely Doll: The Search for Dare Wright,” a biography by Jean Nathan, from 2004, acknowledged a psychic connection to the “obsessiveness and the role playing” of the author. “Although I never read ‘The Lonely Doll’ as a child or saw Dare Wright’s photographs before,” Sherman has said, “it’s as if I somehow did.”

Wright, who was born in 1914, in Ontario, and raised in Cleveland, worked as a child actor and model for fashion magazines before becoming a photographer herself. She shot editorials for publications like Good Housekeeping, converting a closet in her West Fifty-eighth Street apartment into a darkroom, and in her spare time she made glamorous self-portraits in gowns and costumes she had sewn. (One of her photos, showing the elegant author clutching her Rolleiflex camera, appears on the book jacket of “The Lonely Doll.”) “The Lonely Doll” was a best-seller in its time, and Wright went on to have a long career as an author, publishing twenty photo books for children, including nine more in the Lonely Doll series. But, during her lifetime, she granted few interviews, and readers knew little about her until Nathan published her biography, three years after Wright’s death, in 2001, at the age of eighty-six.