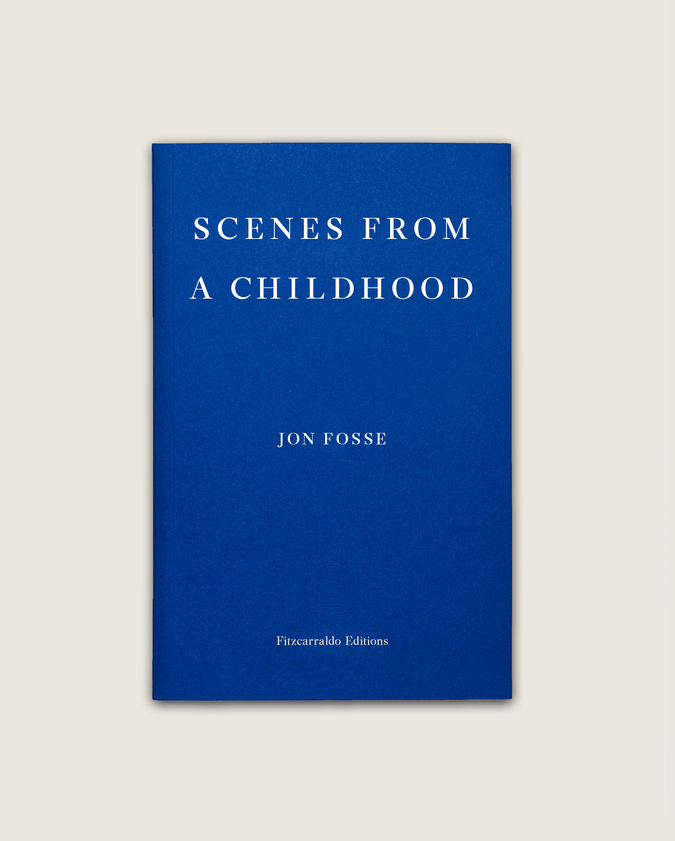 An excerpt from our latest fiction title, Scenes from a Childhood by Jon Fosse, translated from the Norwegian by Damion Searls.

It’s maybe four o’clock when Trygve and I go out to the old barn. My grandfather built this barn but now it’s fall- ing apart, the unpainted planks in the walls are rotting away, there are holes in the wall you can see through in some places and a couple of roof tiles lying in the net- tles, three more sticking out of a puddle of mud. A rusty hook is hanging from the door-frame. The door is hang- ing from the door-frame too, attached with hay-baling cord, swinging crookedly. A warm summer day, after- noon. Trygve and I sit on a large round stone a few yards from the barn. There are plastic bags under our legs with our lunches inside, slices of bread with brown cheese, we each have a soft drink. It’s hot. We’re both sweating. Mosquitoes are buzzing round our heads.

I JUST CAN’T GET THE GUITAR TUNED

I just can’t get the guitar tuned and the dance is about to start. There’s already a big crowd in the room, most of them people involved with the event and their friends and girlfriends, but still a lot of people, when I look up from the shelter of the long hair hanging down over my eyes I see them moving around the room. I’m bent over my guitar, turning and turning a tuning knob, I turn it all the way down and the string almost dangles off the fretboard, all forlorn, and then I strum on it while I turn the knob up, up, I hear the tone slide higher, I strum on two strings, now is this right? no, it always sounds a little off, doesn’t it, and I turn it more, I turn and turn, up and down, I turn it and turn it and the drummer is pound- ing for all he’s worth and hitting the cymbals and the bassist is thumping too and the other guy on guitar is standing there strumming chord after chord and I just can’t get this damn guitar in tune. I turn the knob more, and the string breaks. I push my hair back and shout that the string broke. The others just keep the noise going. I unplug the guitar and go backstage, I have spare strings in my guitar case. I find a new third string. I change the string, turn the knob until the string is on. I walk back onstage. I plug the guitar in again and start tuning it. I can’t hear anything. I shout for the others to stop play- ing. They stop. I try to tune the guitar. I can’t do it. I ask the other guitarist to give me the note, he plays a G on his third string. I turn the knob.

And now it starts to sound right.

Almost there, he says. Maybe a little more. I turn it a little higher and strum.

I turn it down slightly and strum.

Damn it, he says. Take it all the way down, we’ll try it

I turn the knob all the way down. He plays the open

third string on his guitar. I start to turn the knob up. I hear it getting closer. It’s getting closer. I see the other guitarist nod. I turn it a little more. And now it sounds right, almost perfect.

Almost, the other guitarist says.

Careful now, the other guitarist says.

I turn it a little bit more. And I hear the string break. Fuck, I say.

Go get another one, the other guitarist says.

I don’t think I have one, he says.

He digs around in his guitar case some more. He gets up and shakes his head.

Nope, he says. No G string.

Then I guess I’ll have to play with five strings, I say. That’ll probably work, he says.

People are already here, I say.

One day Father yells at him and he goes out to the wood- shed, he gets the biggest axe, he carries it into the living room and puts it down next to his father’s chair and asks his father to kill him. As one might expect, this only makes his father angrier.

IT HAS STOPPED SNOWING

It has stopped snowing. Geir and Kjell are out in the new snow but they’re not going skiing, no they’re busy with their snow shovels, pushing the snow around and beating it down flat and hard. I’m standing at my win- dow spying on what they’re doing out there. I ask my mother if I can go outside and she says OK. I bundle up, gloves and everything, and go outside. I run over to Geir and Kjell and ask them what they’re doing and they say they’re going to play car and make streets and a tun- nel and everything in the snow. I run home and get two cars. I come back and Geir and Kjell have finished with the snow shovels and they’ve already started working on the construction. And then Geir and Kjell and I build a tunnel, and a garage, and a house. This is going to be great. Geir loads snow onto the truck with an excavator. Kjell drives the snow in the truck, then dumps it out. I build a road. We are working and building. We don’t know what will happen next but we crawl around in the snow, humming and whistling, driving and dumping. Snow is falling steadily on us, light and white, so that the road has to be cleared again and again. We work and build and clear the road. Time passes, but we don’t notice. We plough the road and gravel it with the light- est new snow. We don’t notice that some slightly bigger boys, boys we barely know even though they live only a few houses away, have come walking up to us through the yard. The boys don’t live far away but we don’t know them. They stand and look at us. They ask what we’re doing, and we say we’re playing car. They ask if they can play too, and we hand them our cars, our excava- tor. Then we stand and watch the other boys play. They yell louder and push the wheels down into the road, they            laugh and shout.

You can’t fucking drive on a road like this, they say. They have to repair the road, it’s a bad road, Geir

You can’t fucking repair a road like this, they say. These road workers are useless, they say. Making such a crap road, they say.

I want my car back, Kjell says.

Your crappy car, they say.

That car’s useless too, they say.

It’s all a bunch of shit, they say.

What’s that? they say.

You can’t park there, they say.