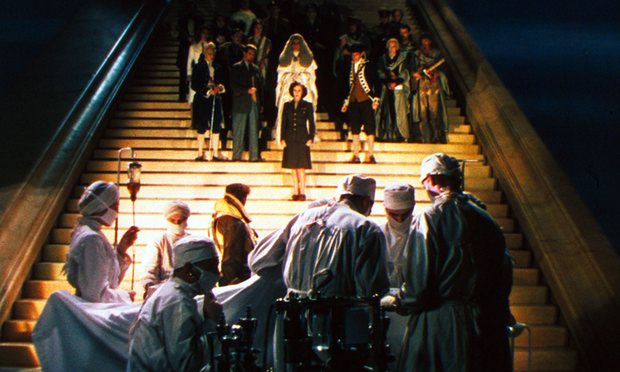 Writing for the Guardian, Brian Dillon revisits Powell and Pressburger’s strange masterpiece, A Matter of Life and Death, seventy years after its original release. Brian Dillon’s Essayism will be published by Fitzcarraldo Editions in June 2017:

The opening scenes of A Matter of Life and Death are among the most audacious and moving ever confected by the cinematic magicians Michael Powell and Emeric Pressburger. After the whump of arrow on target that announces a production by the Archers, we are pitched into the blue-black vasts of space – the film-makers had consulted Arthur C Clarke about the design of their cosmos – where a voiceover guides us past eerie nebulae and exploding stars to our own fretful corner of the universe. On Earth it’s the night of 2 May 1945, a thousand-bomber raid has left a German city in flames, and British pilots have turned for home. Fog rolls across the screen, radios crackle with the voices of Hitler and Churchill. “Listen,” says the narrator, echoing a line of Caliban’s in The Tempest, “listen to all the noises in the air.”

Cut to a red-lit control room, a sinister nest of Anglepoise lamps, and in their midst a young American radio operator named June (played by Kim Hunter) who is trying to speak to the pilot of a damaged Lancaster as it limps across the Channel. The bomber is on fire, its fuselage gaping, ruined instruments rattling around behind Peter Carter (David Niven) as he recites into the ether lines of poetry by Raleigh and Marvell. His crew have all bailed out or been killed; the plane’s undercarriage is gone, and with it any hope of landing safely. Will he jump too? Yes, he tells June; but there’s a catch: “I’ve got no parachute.” The exchange that follows between the Boston-born WAAF and the doomed English airman is absurdly (and knowingly) exalted: “You’re life, June, and I’m leaving you!” On the film’s release 70 years ago, some critics balked at the cardboard romanticism of the scene. But I’d challenge anyone to stay untouched to its end, watching Peter steady himself for a chuteless fall into the fog.

Miraculously, the young pilot survives, and is washed up on a beach in Devon, where he meets June cycling across the sands. But Peter was meant to die, and the authorities in the next world will not let him go, just because he has fallen in love. So far everything has been in ravishing colour, but suddenly we are in a black-and-white modernist heaven where the first bureaucratic mistake in centuries has set off celestial alarm bells. A heavenly “conductor” – Marius Goring as a French aristo fop – is dispatched to retrieve the undead man, but Peter resists, and a trial looms at which he must plead for more time on earth. A Matter of Life and Death is a self-consciously Shakespearean comedy of sorts, and a lurid experiment in cinematic colour and scenography. But it’s also an end-of-war reflection on the living and the dead, including those who have been missing for a time, stranded in between.

The film began as an expressly propagandist project. Jack Beddington, head of film at the Ministry of Information, asked Powell and Pressburger over lunch: “Can’t you two fellows think up a good idea to improve Anglo-American relations?” By the time they made “AMOLAD” (as all involved called it), the Kentish director and Hungarian screenwriter had twice exceeded their war-effort brief, with controversial results. The Life and Death of Colonel Blimp – whose star Roger Livesey returned in A Matter of Life and Death as the neurologist Frank Reeves – scandalised Churchill with its portrait of a good German and its mockery of a certain English bluster. And in A Canterbury Tale, Powell and Pressburger revelled in a twisted vision of old England at the near-gothic (but again comical) expense of the film’s message about Anglo-American cooperation before D-day.