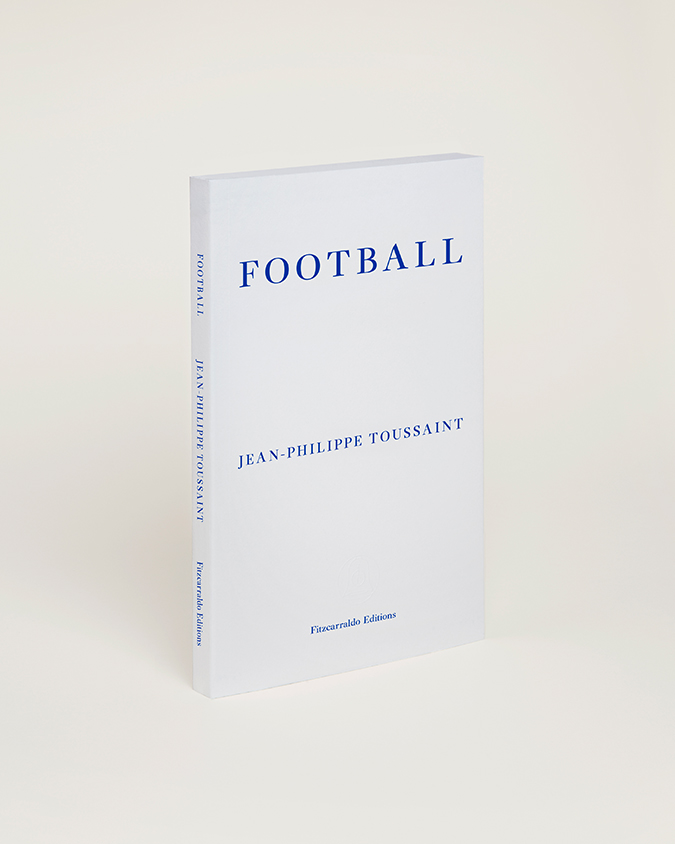 Today is the publication day of Fitzcarraldo Editions’ thirteenth book, Football by Jean-Philippe Toussaint. In honour of this, here’s an extract from the essay from the pages ‘Tokyo/Japan 2002’:

It was greyish in Tokyo the morning I arrived, hot, heavy, foggy. My mind numb, I fought against sleep in the big, almost empty orange ‘Airport Limousine’ coach that took us into the city in the early morning, snoozing on my seat together with the few Japanese present in the bus, a people quick to take a little public nap in shared transport (you would think that the whole nation suffered from chronic jet lag). In short, Tokyo wore its usual face in those first days of the World Cup. The most I can say is that I was woken up in my hotel room at about four o’clock in the morning by a confused urban racket that mixed with my dreams and finished in disarray with a chorus of male voices chanting incomprehensible pleasantries, invariably punctuated by ENGLAND! ENGLAND! while, through the half-open curtains of the room there passed a dawning day, still milky with the air of Helsinki daybreaks. It’s the first time too that, in a Tokyo hotel, a fellow guest has asked me at reception which country I came from, and who, when I told him I was from Belgium, asked me when I was playing. When I was playing? But I was still as plain-clothes as possible, dark trousers and black jacket, no tricorn or scarf, hunting horn, devil jersey or red BELGIUM cap, but, with a lot of self-control, working out what he was referring to, I told him I was playing tomorrow, tomorrow night. Good luck, he said.

During those first few days in Tokyo, I stayed in a small hotel in Shibuya, at the end of a street of love hotels lit by multi-coloured neon signs, which rose at a slight gradient no distance from Bunkamura. Since arriving, I divided my time between lectures at universities and match broadcasts on television. I took my meals at restaurants with Japanese professors who welcomed me into their classes, or alone in my hotel room, snack-ing in front of England-Sweden or Spain-Paraguay on television, sitting on my bed in my cramped little room, my food cartons spread out around me on the bed covers, the plastic film that covered the dishes already rolled up in a ball in the bin, the chopsticks separated, opening the sachet of soy to pour it carefully over the food, fingers slightly sticky with sauce. I like picnicking like that in hotel bedrooms when I’m in Japan, it’s a pleasure to leave the hotel to go and dig out some local convenience store, 7-Eleven or FamilyMart, open twenty-four hours a day, and assemble a menu among the shelves by carefully choosing different dishes from the refrigerated compartments (sushi here, seaweed there, fragments of pumpkin, aubergines, spinach), then to head towards the drinks and hesitate between the different kinds of tea, before opening the door of a freezer to take out, for dessert, a little tub of green tea ice-cream (in Kobe, after the Brazil-Belgium match that ended at night, I wasn’t the only one doing this kind of shopping before going back to the hotel, there was a real procession of customers who passed through the Lawson store before filing back to their rooms through the luxurious hotel lobby, clutching plastic bags).

The first match I had a ticket for during the World Cup jointly organized by Korea and Japan was Japan-Belgium on 4 June 2002 in Saitama, it was Japan’s opening match, the co-organiser’s entry into the fray, the match of a whole nation (Japan-Belgium, poor us!). A rumour was already circulating that to get to the stadium it would be wise to allow a journey time of three to four hours, there would be at least sixty thousand Japanese spectators, and apparently I had no idea about Japanese crowds given that two or three hundred thousand people will sometimes hurry to see a firework display around a tiny stretch of water. So I prudently left the hotel early in the afternoon, carrying a light rucksack containing my binoculars, a camera and my supporter’s cap. Tens of kilometres away from the stadium, before I even entered the metro, I started to notice the first blue jerseys in the streets of Tokyo, those blue Japanese jerseys like the ones worn by the French team, most bearing the 7 of Nakata or the 5 of Inamoto, the 8 of Ono or the 10 of Nakayama, and, all these blue jerseys, like isolated droplets which, resembling one another, finally form a thin stream flowing in the streets, then a great watercourse, a blue river, increasingly swollen, leaving the mouths of the metro and spreading along the avenues to enter the stadium where, suddenly, huge waves form and surge along the crowded stands, and where, amidst an enormous hubbub, rises the irrepressible blue tide of sixty thousand Japanese supporters on their feet, chanting the name of their country: NIPPON, NIPPON!

A few seconds before kick-off, in the electric atmosphere of the stands of the Saitama stadium, while the players were already in place and the match was about to begin, four amazing fighter planes suddenly flew over the stadium at a low altitude, brushing the rooftops and disappearing with a deepening roar and leaving in their wake unsettling scraps of smoke and sinister reminiscences of war, violence and air-raids. But apart from these childish militaristic displays, the evening was as gentle as could be. The whistle was blown, and when, like an unexpected deliverance, Belgium opened the scoring with a spectacular acrobatic scissor-kick by Wilmots, I leapt from my seat, arms in the air, turning in a circle and giddily jumping around in the stands, not knowing where to go, who to celebrate the event with, before spotting another Belgian as isolated as I was among the terraces. We gauchely hurried towards each other, not knowing how to concelebrate our goal, merely striking our palms violently together, like two American basketball players who have just pulled off some kind of feat. Nothing more, we didn’t exchange a word, I don’t even know if this man spoke French (it was one of the strangest relationships that I have ever had in my life), finding him again a quarter of an hour later in the same place to repeat the same gesture after Belgium’s second goal. I could have settled for celebrating the Belgian goals, but I must confess that, almost without admitting it to myself, I always felt a secret satisfaction at the sight of this stadium exploding and trembling on its foundations each time the Japanese scored a goal. In the end, this draw suited me wonderfully well, it was even the exact score that I had wished for. I remember that, in early December, when the group stages were drawn, I had sent an email to Kan Nozaki, my Japanese translator, to tell him I hoped we would be outdoing each other with courtesies at this Japan-Belgium game and that, knowing by reputation the excellent manners of his countrymen, I hoped that the Japanese would have the exquisite politeness not to beat us, and that we would have the elegance not to take advantage of this to win.