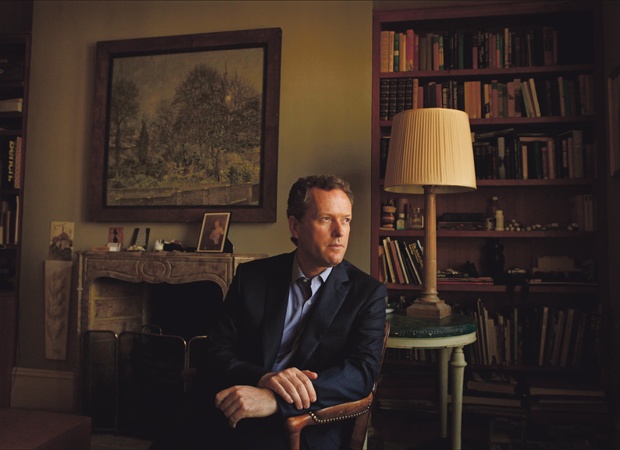 Ian Parker in the New Yorker on the novelist Edward St Aubyn — a man who ‘has the air of someone who is puzzled, and rather impressed, to find that he is not dead’:

Toward the end of his three-year course, a generous but too hopeful professor suggested to him that, with effort, he could do very well on his final examinations. Not long before this conversation, St. Aubyn had stopped breathing in the back of an ambulance between his London apartment and Charing Cross Hospital, after an overdose. Feeling that he “had to confess,” St. Aubyn said, “Well, there is a problem—I am a heroin addict.” The professor was concerned. “He said, ‘Do you have a television?’ I said, ‘No.’ He said, ‘Oh, do get one, they’re very relaxing.’ ” St. Aubyn laughed. “The Oxford University recovery program. I bought a television and took it back to my Oxford flat, and watched a lot of daytime television.” The university awarded him the lowest possible class of degree: a pass.

On our walk through Oxford, we passed Keble, his college, and he mentioned that, in 1982, during the vacation before final exams, he had attempted replacing heroin with whiskey and Valium. Waiting in a pharmacy to fill his Valium prescription, he met Nicola Shulman, the daughter of well-known journalists. Shulman became his partner until the end of the decade. She was having a sunnier experience at Oxford. The election of a Conservative government, in 1979, and the success of such period dramas as “Brideshead Revisited” had made it newly fashionable for students to participate in moneyed, black-tie frolics. (Hollinghurst’s “The Line of Beauty” captures the moment.) Shulman’s extended circle, which St. Aubyn joined, included Hugh Grant and Nigella Lawson, whose father was one of Margaret Thatcher’s ministers. The previous summer, Lawson had been photographed dangling a croquet mallet out of a sedan chair carried, on poles, by four young men.

St. Aubyn could play the part. He was not quite an aristocrat; an English peer, when recently asked to identify St. Aubyn’s place in the country’s upper classes, paused for a long time and then said, “Well, he’s upper-middle-class, isn’t he?” But St. Aubyn said “huff” for “have,” and “orf” for “off.” Oliver James is sure that St. Aubyn has never worn a pair of jeans: “He always dressed like, and had the manners of, a toff.” And St. Aubyn was attractive, thanks, in part, to his mixture of vulnerability and predatoriness. One observer described him as a “golden lamb” with “very beautiful soft skin and wonderful wavy hair.”