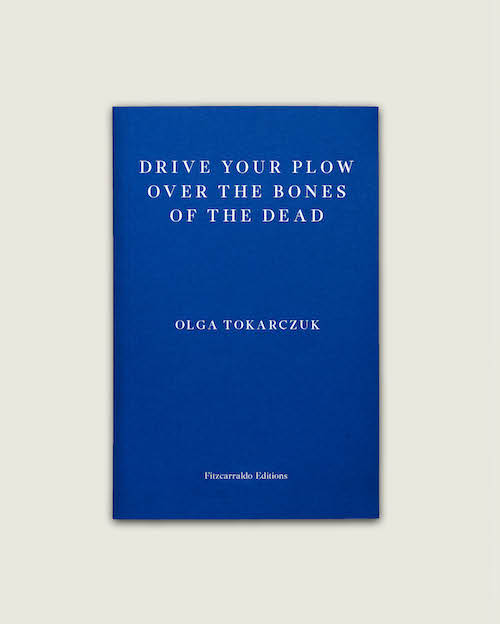 When Olga Tokarczuk’s novel Drive Your Plow Over the Bones of the Dead, published by Fitzcarraldo Editions, was shortlisted for several prizes including the Man Booker International award in 2019, there were a number of public promotional events, at which I did readings from the book. To maximise the opportunity, I never read the same extract twice. I chose dialogue-free extracts, and made the unconventional narrator sound eccentric, to catch the audience’s attention, and give them an idea of the whole book – black comedy, with this strange character at its heart. These readings were well received, and even though the book didn’t win any prizes, I was rewarded by kind comments and excellent sales. To my surprise, several people asked if I was going to read the audiobook. I hadn’t heard of a translator doing that, but authors read their own work, so why not? I asked Jacques Testard, the publisher, if it was possible. He liked the idea, but although hoping to make an audiobook, he didn’t yet have the resources.

Meanwhile the much larger American publisher was planning to record one, so I offered my services, but was told I sounded too British. The job went to an American professional actress of Polish origin, who read it with a mild Polish accent, and won an award for her reading. I was disappointed, but realised I’d expected too much. I thought the whole thing was off and forgot about it.

Almost a year later, Jacques told me that Fitzcarraldo had received a grant to make some audiobooks, and would I still like to record Drive Your Plow… for the UK market? I immediately said yes, although I knew it would be a challenge.

How to get it wrong

The recording schedule was tough – three days to read 268 pages. I felt nervous on the first day, and soon discovered that I wasn’t properly prepared. Of course I knew the text well, but I had never read the whole thing aloud to an audience before, just short, self-contained pieces, for a few minutes at a time, to make an impression quickly.

On that first day I expected to record six chapters, but after four, Kate Bland, the audiobook producer, said she thought we’d better stop to allow Tamara Sampey-Jawad – the Fitzcarraldo editor responsible for their audiobooks – to hear it, and decide if that was what they wanted. It was obvious from her tone that it wasn’t what she would have wanted. I asked her to tell me straight what I was doing wrong. She was diplomatic, but made some general suggestions: I wasn’t differentiating the characters well enough in the dialogues, and I wasn’t getting the pace right for long sections where the narrator describes a scene at length, or expounds one of her bizarre theories.

I was crestfallen – so I was out of my league. As someone with no professional training, I’d been presumptuous to imagine I could do this. I was afraid Tamara would listen to the recording, agree with Kate, and ask me to stop. Instead, she liked it, and I was back on board. But I knew I should listen to Kate’s warning. I asked to defer the recording to give me time to do some more thinking, and to prepare properly.

How to get it right, possibly

In my efforts to find a new approach, first I consulted friends: an actor who has recorded lots of audiobooks, and a theatre director. They gave good advice, and prompted me to listen to some existing audiobooks with a new ear. I also read the entire book again, aloud, to rehearse, which earned me some funny looks on public transport.

As I read, I highlighted the dialogue to give myself visual cues for the lines spoken by different characters. I realised that I shouldn’t give them accents or strong quirks of speech, because I wouldn’t remember who spoke how, it would be hard to keep up, and it could sound off-putting or patronising. Instead I simply had to alter the tone to reflect who was speaking and what they were saying – act the lines, as it were, and pause between them to allow the listener to keep pace with changes of speaker.

Most importantly, I realised, or rather remembered, that the narrator was the key to the whole reading. When I translated the book to be read on paper, I had made sure that although the central character, Janina Duszejko, is plainly eccentric, she shouldn’t be too weird, or the reader wouldn’t want to stick with her to the final page. For the purposes of the story, ideally the reader needs to sympathise with her, even though she’s a rebellious non-conformist who rubs people up the wrong way. More than that, the reader needs to become complicit with her as she embarks on some unusual behaviour. I think she sounds quite stylised in Polish, and it works, but for English-language readers I instinctively feel she should be a little less overtly strange, so in my translation I reined her in a bit, to make sure the reader found her likeable as well as odd.

Now I realised that I needed to do the same thing for the listener. Reading aloud adds another layer of interpretation – reading off the page for themselves, the readers understand the text in their own way, but the actor reading the audiobook inevitably interprets, influencing the listeners’ response. While in short bursts at public events it had been all right for me to add a tone to tell the audience that Duszejko is eccentric, that was the worst thing I could do when reading the entire book. It would become annoying after an hour or two – and that’s what Kate had picked up on. I was making the narrator too alien, and ultimately unsympathetic.

So I took a new approach, and read it straightforwardly, as me, rather than the way I imagined the character might sound in real life. And it all fell into place – reading it without encumbering myself by “acting” the narrator allowed me to change the pitch, pace and tone when I actually needed to. I felt much more relaxed when I came to do the recording, and wasn’t fazed by the dialogues either. Of course I can’t be the judge of the result, but Kate seemed happy with my change of approach.

How it works in practice

If you’re wondering how audiobooks are made, the producer sits you down in a recording studio, carefully adjusting the seat and the position of the microphone to make sure you’re comfortable. Then she shuts you in there alone, taking her place on the other side of a glass screen, at a computer showing the sound levels. She speaks to you through a microphone, occasionally making useful comments. In my case, the book was on a stand in front of me as I read, and I made pauses to turn the page, a noise that has to be edited out afterwards.

It’s impossible to read for long without fluffing. Some sentences took several goes, making me feel like a scratched CD that’s juddering. Some words just decide to be bolshie: I had trouble with ‘retrograde’, ‘particularly’, and ‘deaths’. Thankfully, the producer removes all the false starts, coughs and splutters, making the recording sound smooth as silk. So yes, there is some mild cursing, but it ends up on the cutting-room floor.

The text included two songs, one very famous, but on my theatre director’s advice I didn’t attempt to sing, but spoke them. I had to check in advance some dates in German, and how to pronounce some unusual words, including ‘adipocere’, ‘Ephemerides’, ‘pyknic’ and ‘butyric’. Oh, and Cucujus haematodes.

Of course, as the translator, I couldn’t resist making a few tiny amendments as I read, and even found a mistake, where a ‘not’ had been left out, so the audiobook is slightly different from the printed edition.

And it was bloody hard work – try reading 104 pages aloud in a period of six hours with two half-hour breaks. After the first day I felt as if I’d swallowed tin tacks. Hurray for Strepsils and especially for (disgusting but effective) Vocalzone throat pastilles, honey and lemon juice.

Even after translating this book, reading the whole text aloud showed it to me in a fresh light. It confirmed what I knew, that Olga Tokarczuk is a brilliant writer. Perhaps only a former psychotherapist could have created the extraordinary Janina Duszejko, who talks a lot of truth and common sense, but who can also come across as seriously unwell and out of control. Reading it again so intensely made me have new feelings about Duszejko – she partly inspired me as I found myself sympathising with her often extreme views about animal rights and human folly, and she partly made me want to get away from her at high speed as she gradually slid off the rails.

Perhaps some people will like my reading, and some won’t – the sound of someone else’s voice is a personal thing. But I hope I’ve done justice to Olga Tokarczuk and her extraordinary creation, Janina Duszejko.

Thank you to everyone at Fitzcarraldo Editions and Cast Iron Radio.