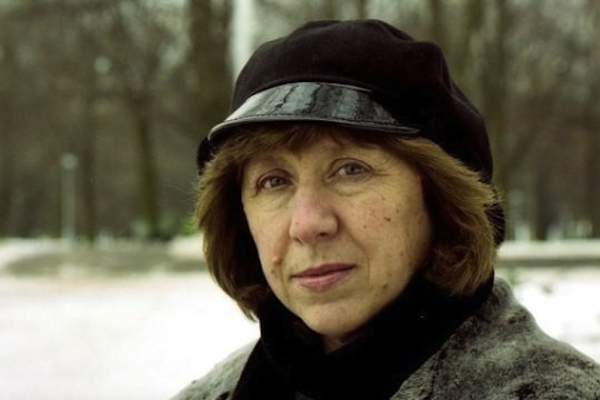 The Nobel Prize winning author joins 30 other writers in leaving the Russian PEN organisation after the expulsion of jailed journalist Sergey Parkhomenko. Paula Erizanu writes for the Guardian:

Nobel prize winner Svetlana Alexievich has quit the Russian PEN centre to protest against the expulsion of journalist and activist Sergey Parkhomenko, joining 30 other writers including novelist Boris Akunin and poet Lev Rubinstein leaving the organisation.

Alexievich, who withdrew from the organisation on 11 January, wrote in a statement: “My comment on Parkhomenko’s exclusion [from PEN] can only be my application to leave the Russian PEN, whose founding ideals were cravenly violated. In the perestroika years we took pride in our PEN but now we are ashamed of it. Russian writers acted as subserviently and outrageously only during the Stalinist period. But Putin will go, whereas this shameful page from the history of PEN will stay. And the names will stay, too. We now live through times when we cannot win over evil, we are powerless before the ‘red man’. But he cannot stop time. I believe in that.”

Thirty writers have now left Russian PEN, with many publishing their withdrawal letters online. Akunin – one of Russia’s most widely read contemporary authors of detective fiction – withdrew the day before Alexievich. Akunin said that he felt Russian PEN did not stand for freedom of speech, that it failed to defend persecuted writers and therefore has “nothing in common” with the global network of PEN centres. There are 145 PEN centres in more than 100 countries, working with the core mission “to defend and promote freedom of expression, and to remove barriers to literature”.