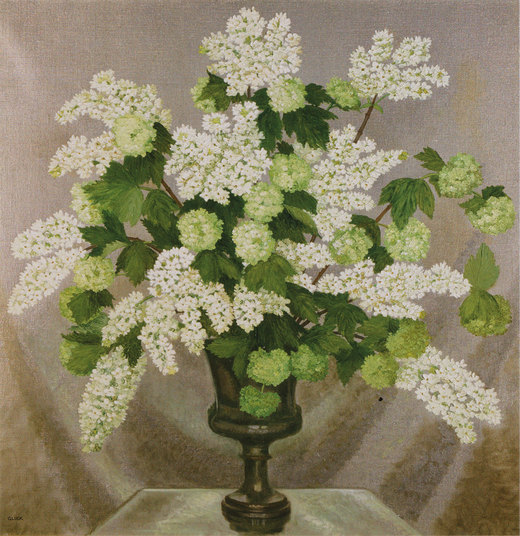 Brian Dillon reviews the Tate Britain exhibition Queer British Art 1861-1967 (on until 1st of October) for London Review of Books:

On 28 April 1870, Miss Stella Boulton and Mrs Fanny Graham attended the Strand Theatre in London, where they made a spectacle of themselves, catcalling from their box to various men below. As the giddy pair left and approached their carriage, a plain-clothes detective stopped them: ‘I have every reason to believe that you are men in female attire.’ Stella was indeed one Ernest Boulton, music hall artiste and rent boy, and Fanny was Frederick Park, a trainee solicitor. At Bow Street police station they were arrested and charged with sodomy. Stella, it transpired, had been living as the wife of Lord Arthur Pelham-Clinton MP, who promptly died of cholera before the case went to trial. In Westminster Hall, before the Lord Chief Justice, a jury acquitted Fanny and Stella: there was no evidence of buggery, and nobody could determine that cross-dressing was a crime.

There are two studio photographs of ‘The Funny He-She Ladies’, as the newspapers called them, in the Tate’s survey of a century and slightly more of queer British art, from 1861 to 1967, the year male homosexuality was decriminalised (the show closes on 1 October). Here is Lord Arthur doted on by curl-headed Ernest and Fred, who are in masculine mufti, and then crinolined Fanny and Stella à deux: all over each other like sentimental sisters. It was just nine years since the death penalty for the crime of sodomy had been abolished in England and Wales, and 25 years before Oscar Wilde’s trial. (The exhibition includes Wilde’s cell door from Reading Gaol.) As Neil McKenna points out in his catalogue essay, Boulton and Park would almost certainly have called their evening get-up ‘drag’; but they would not yet have thought of themselves as ‘queer’ or ‘homosexual’: terms not established till the 1890s. Queer British Art begins at a moment when its theme is both overdetermined – the insistence on anal sex as evidence – and ambiguous, frequently unnoticed or elided.

Consider the range of male artists and male bodies that opens the exhibition. When Simeon Solomon’s painting Bacchus – doe eyes, ringlets, Cupid’s-bow lips parted – was exhibited at the Royal Academy in the summer of 1867, it caused no critical stir. But a year later, at the Dudley Gallery, Solomon’s watercolour of the same subject was thought by the Art Journal to depict ‘a sentimentalist of rather weak constitution’. Such euphemism was common enough, but critical reaction sometimes more direct: in 1869, the Times noted that Frederic Leighton’s smooth and golden Icarus, who is billowed about by luscious drapery, also seemed to be showing ‘the soft rounded contour of a feminine breast’. The ‘subtler threads of temperament’ that Walter Pater had adduced in Winckelmann’s Hellenism were more than hinted at in works like Walter Crane’s The Renaissance of Venus (1877), where the goddess is in most physical respects, as writer and artist W. Graham Robertson put it, ‘a fine, upstanding slip of a boy’.

There are considerably fewer female artists, and women’s bodies, in this show than there are men – a fact the Tate curators acknowledge, along with the infrequency of non-white faces: ‘We have been constantly frustrated by the comparative scarcity of material.’ In a section somewhat dutifully titled ‘Defying Convention’, we find John Singer Sargent’s 1881 portrait of an austerely boyish Vernon Lee, and Alvaro Guevara’s Dame Edith Sitwell from 1916. Laura Knight, three years earlier, had been condemned by the Telegraph for a self-portrait with a nude model that lacked ‘the higher charm of the “eternal feminine”’. A few such notable nudes aside, there is a tendency to allegorise lesbian desire in objects and interiors: as in Ethel Sands’s The Chintz Couchof 1911, or the frothy Lilac and Guelder Rose by Gluck (born Hannah Gluckstein) from 1937. Even Claude Cahun – who here counts as British for having lived on Jersey – is represented not by her shaven-headed self-portraits but by photographs of her delicately Surrealist sculptural assemblages under glass bell-jars.

Such displacements, whether on the part of curators or artists themselves, might seem timid, but they have the fortunate effect of posing the question, more frankly than the Victorian male nudes, what a queer aesthetic might look like, as distinct from mere subject matter. The answers are in some ways predictable: there is a room at Tate Britain given over to theatre, in which one may view Noël Coward’s monogrammed scarlet dressing gown and Oliver Messel’s designs for the 1959 film of Suddenly Last Summer. Style, poise, extravagance: these we might expect. (Consider Glyn Philpot’s 1935 painting of Glen Byam Shaw, who is playing Laertes but looks as though he’s stepped off the set of a New Romantic music video fifty years later.) But it’s a certain texture that seems to signify most, as for example in the theatrical photographs of Angus McBean, who was jailed during the Second World War for his homosexuality. McBean’s 1937 portrait of Beatrix Lehmann twins the actress’s face with incongruous block and tackle, and frames this ‘surrealised’ arrangement with silk drapery. His 1941 study of Quentin Crisp is an astonishing instance of the retoucher’s art, the subject’s burnished flesh so perfect it is hardly there at all.