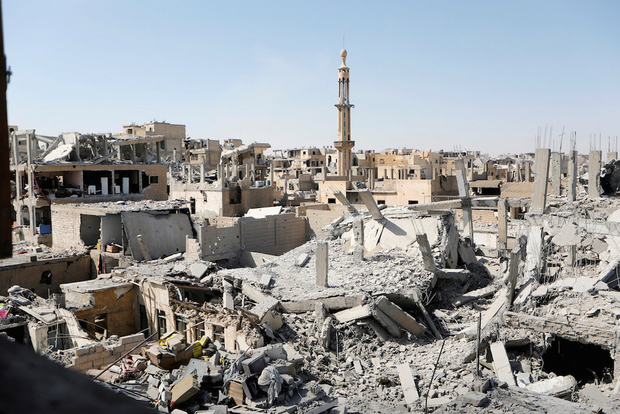 Patrick Cockburn on the siege of Raqqa for the London Review of Books:

Shortly before the siege of Raqqa began in June, Islamic State officials arrested Hammad al-Sajer for skipping afternoon prayers. Hammad, who is 29, made a living from his motorbike: he carried people and packages, charging less than the local taxis. IS had arrested him a number of times before – mostly for smoking cigarettes, which were banned under IS rule – but he had always been released after paying a fine or being lashed. Attendance at prayers was compulsory and he had missed the Asr, the afternoon prayer, because a passenger had made him wait while he went into his house to get money for his fare after a trip to Raqqa’s old city. Hammad expected to be fined or lashed, but this time he was sentenced to a month in prison. Except it turned out not to be prison. On his first morning, ‘militants blindfolded us and took us in a vehicle to a place that seemed to be inside the city because it took no more than ten minutes to get there.’

Hammad and the other prisoners, all of them local men, were taken to an empty house. In one of the rooms there was a hole in the floor. Rough steps led down about sixty feet before the tunnel flattened out into a corridor, which was connected to a labyrinth of other tunnels. A fellow prisoner, Adnan, told Hammad that IS had started work on what was effectively a subterranean network a year and a half earlier. In other words, construction began in 2015, after IS’s spectacular run of victories ended and it started its long retreat in the face of Kurdish offensives backed by coalition firepower. To escape the aerial bombardment, IS decided to disappear underground, digging immense tunnel complexes underneath its two biggest urban centres, Mosul in Iraq and Raqqa in Syria, to help it defend itself when the final assaults came.

Few people in Raqqa knew the extent of the excavations going on beneath their feet – not even Hammad, who rode his motorbike around the city every day. The entrances were always in districts from which local inhabitants had fled or been evicted. ‘When we got into the tunnels we were amazed,’ Hammad remembers. ‘It was as if an entire city had been built underground.’ IS must have needed an army of workers to build it – but then there were large numbers of prisoners and jobless labourers to draw on. The prisoners were told as little as possible about what they were doing: anyone who asked a lot of questions was punished. Hammad saw rooms with reinforced concrete walls and ceilings, and what looked like boxes of ammunition piled up on the floor. When he asked about the boxes, he says, one of the guards ‘hit me on my back with a piece of cable and said: “Don’t poke your nose into things. This is not your business. Do your job and keep quiet.”’ The foreign fighters on duty were silent and unapproachable, but some of the guards were locals and occasionally talked to the diggers during the ten-hour working day. ‘Sometimes they joked with us because they were bored and tired,’ he says. One day he asked one of them what all this hard work was for. ‘This great construction will help the lions of the caliphate to escape,’ he said (the ‘lions’ were the IS emirs and commanders). ‘They have a message to deliver to people and they should not die too soon.’

IS officials used prisoners to work on the tunnels when they could, but they also hired labourers. One of these was Khalaf Ali. When IS seized the city in 2014, he was selling cigarettes in the street. ‘I was picked up by some militants who took me to a commander,’ he says. ‘They did not take me to prison, but they confiscated my boxes of cigarettes and said that if I sold cigarettes again, they would put me in prison and I would get thirty lashes.’ He started spending his days in a local square with other unemployed men; they would wait for a car or truck to stop and offer them odd jobs – moving furniture, mending broken doors or windows. In April 2016, Khalaf was sitting in the square with the others when an IS security man said he wanted to talk to them. At first they were nervous, but the official said they could have work if they registered their names at an IS office. When they showed up at 7 a.m. the following day, they were told they had to agree to certain conditions: ‘We must not talk about what we were doing in public as it was one of the caliphate’s secrets and, if we violated this condition, they would kill us as traitors.’ They were blindfolded and driven a short distance to an empty house, where the blindfolds were removed. It wasn’t the house Hammad had first been taken to: here, there were no stairs, just a sloping tunnel about 150 feet long, which took them around sixty feet underground.