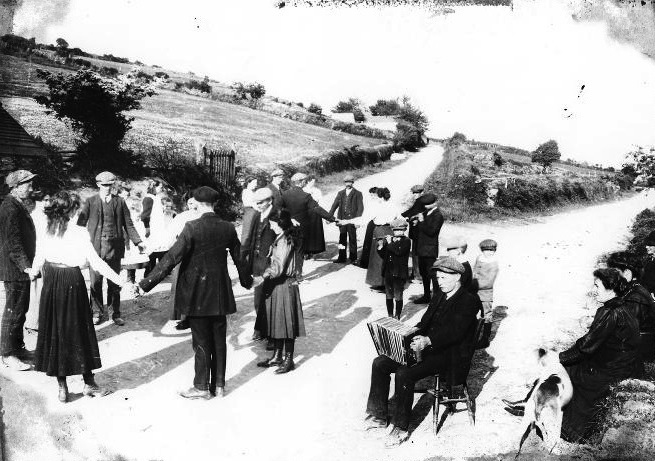 A new project has begun to explore and document the wealth of experimental music in Ireland’s past. Ian Maleney speaks to the Aisteach Foundation’s Jennifer Walshe about ecclesiastical drone, bog-dwelling noise musicians and a hitherto uncelebrated group of queer composers:

There was this guy I went to school with, lived about a mile away from us. His grandfather was the principal of one of the three parish schools, back in the days before they were amalgamated into a single, yet still tiny, entity. That was in the late 70s I think, or around then. He wasn’t that old then; 60, maybe 65, but a venerable civil servant all the same. Like many a civil servant in Ireland, he had things going on outside of the job that few people at the time really knew about. I guess his family knew, some of the parish probably did, but there were only ever hints of it publicly. He kept it mostly to the shed at the back of their house, itself a picturesque country home next to the parish hall, two storeys with a tall roof, cubic, squat but somehow elegant under the unnecessary shade of tall Douglas fir trees that dominated the front yard. Ivy was growing up the front of the house when I knew it, by which time it had been sold to a couple of German retirees. Master Madden was dead by then, and I never met him.

My friend’s dad told me about one of the moments when Master Madden’s second life peeked out from wherever he kept it locked. It was the occasion of the school’s Christmas play, and Madden had decided that his two dozen pupils, aged between four and twelve, would perform a dramatic work of his own devising. Nobody called it an opera at the time, though I suppose that’s what it was, in a sense. My friend’s dad, Madden’s son, was eight at the time, so this would have been 1960 or thereabouts. His own recollection was shady enough, but it was essentially an updated version of the great Greek myth of Perseus and Medusa, told from the perspective of Perseus’ mother, Danaë, and set along the callows of the river Shannon.

The year before they’d done the nativity and they would return to that classic myth a year later, but Madden felt comfortable enough in his position as principal that he could take a risk every now and then. And so the kids were assembled each afternoon to paint masks, cut costumes out of old fabrics donated by their mothers and to practice singing their way through Madden’s self-written score. The instrumentation was minimal: two drums, played by the rhythmically-minded Kelly twins, aged six-and-a-half, and a droning set of uilleann pipes played by Gary Flannery, whose dad owned the pipes. A radio was switched on and off irregularly. Madden’s son was Perseus, of course, and Medusa was played by his older cousin Laura, a girl of ten. Two sixth-classers played Zeus and Danaë, who narrated, and the rest of the school rowed in as a chorus. This mass of terrified and confused children were made to rehearse a libretto that, in its theatrical atonality, resembled a sort of tribal version of Schoenberg’s Moses Und Aron, albeit a couple of octaves up thanks to the unbroken voices of the children. It was, by all accounts, a disaster. Though no recording of the night was ever made, early drafts of the score were found in the shed after Madden’s death. He worked steadily but at a slow pace, completing three full operas before his death, and a filing cabinet full of shorter pieces, sketches and unfinished ideas. To date, none of Master Madden’s work has ever been published or performed, except by the pupils of the Clonleabe National School, sometime around 1960.

I was reminded of the story upon encountering the latest attempt to open up the twisted and shadowy history of the Irish avant-garde for contemporary audiences. The Aisteach Foundation, helmed by composer, performer and archivist Jennifer Walshe, have presented The Historical Documents Of The Irish Avant-Garde as an ongoing, transdisciplinary project incorporating a book, a website and several exhibitions. The idea grew out of another exhibition, ‘Irish Need Not Apply’, curated by Walshe in New York’s Chelsea Art Museum back in 2010. The exhibition included a set of recordings, made by the Irish Folklore Commission in 1952, of a musician by the name of Pádraig Mac Giolla Mhuire, born in New York of Irish immigrant parents, playing in Cork with two friends, Dáithí Ó Cinnéide and Eamon Breathnach. The trio combined long, sustained notes from Mac Giolla Mhuire’s accordion and Ó Cinnéide’s fiddle with frantic, Eric Dolphy-like solos of tin whistle, and they called it dordán, an Irish world for drone. It’s not a million miles away from early Velvet Underground recordings, or La Monte Young’s Theatre of Eternal Music. Mac Giolla Mhuire had returned to Ireland with his mother in 1950, after his father, a talented uilleann piper, had died of tuberculosis the same year, and he seemingly brought a mournful but radical style of traditional music back to the old sod. As Antoinne Ó Murchu, who discovered the recordings in the Folklore Commision’s archives, said at the time: “To think that the roots of minimalism could lie in Irish outsider culture…”.