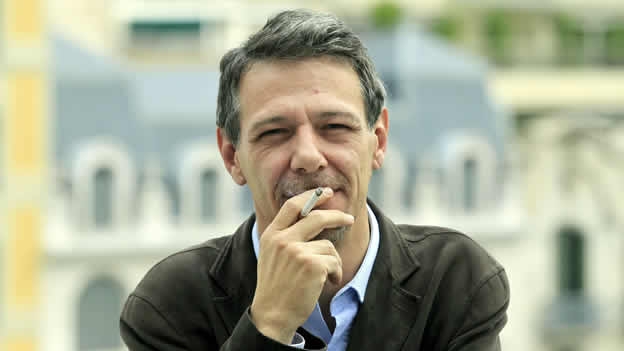 Here’s an extract from an extract of Álvaro Enrigue’s novel Sudden Death, published earlier this year by VICE and described by the magazine’s culture editor, James Yeh, as ‘one of the most engaging, audacious, and flat-out fun works of fiction I’ve read in a while’:

Don Diego de Alvarado Huanitzin, Nahua of noble birth and master featherworker, was at his shop in San José de los Naturales—once a farm of exotic birds under the Emperor Moctezuma—when he met Vasco de Quiroga. They were introduced by Fray Pedro de Gante, who managed what was left of the totocalli (as such farms were called) after the brutal years of the invasion.

The lawyer and the featherworker were soon on a comfortable footing, since both were of noble birth, both had been part of imperial courts in their youth, both had remained—over the 12 most confusing years that their two vast and ancient cultures had known in who knows how many centuries—in the unusual situation of actually being free.

Vasco de Quiroga had no reason to return to Spain and was greatly excited by the idea of building a society on rational principles. The Indian had nowhere to go back to, but he had managed to find a relatively secure and comfortable spot for himself after years of darkness, misery, and fear. His aristocratic rank was respected and his work was so admired that most of the pieces made in his shop were sent immediately to adorn palaces and cathedrals in Spain, Germany, Flanders, and the duchy of Milan.

Unlike most Mexicans, Don Diego de Alvarado Huanitzin did know what this meant: He had been to Europe. He belonged to the select group of highborn artists who were received by the Holy Roman Emperor on Cortés’s first trip back to Spain, and he knew very well that the new lords of Mexico might be eaters of sausage made from the blood of pigs, but they were also capable of rising far above their barbaric ways when it came to building palaces, painting canvases, cooking animals, or—and this impressed him most of all—making shoes.

From the moment that the ship he had been obliged to board (though not herded onto like cattle) sailed out of sight of American lands, Huanitzin realized that in order to survive his new circumstances he would have to learn Spanish. By the time they arrived in Seville, after stops in Cuba and the Canary Islands, he was attempting polite phrases in the language of the conquistadors and was able to say that he and his son would be happy to make a heavy cloak of white feathers for His Majesty: The sailors had told him that Spain was known for being cold.

Cortés loved the idea of the featherworker and his son making a small demonstration of their art in court—he himself had a spectacular feather mantle on his bed at his house in Coyoacán showing the birth of water in springs and its death as rain—and he immediately gave Huanitzin favored status among his entourage. Not only did the featherworker speak Spanish—terrible Spanish, but he could make himself understood—he was the only one who seemed to show any interest in taking stock of his new circumstances.

Once in Toledo, the conquistador arranged for a workshop to be set up next to the palace stables and negotiated unrestricted access to the kitchen, where the preparation of ducks, geese, and hens afforded Huanitzin a sufficient supply of feathers to make a cape for an emperor who, the featherworker was beginning to understand, had defeated the Aztec emperor because he was infinitely more powerful, even though he lived in a dark, drab, and icy city.

After setting him up in his new shop and providing him with satin, glue, paints, brushes, tools, and the assistance of the royal cooks, Cortés asked Huanitzin what else he needed in order to pay tribute to the emperor. Shoes, he replied. What kind, asked the conquistador, imagining that he must be cold and want woolen slippers. Like yours, said Huanitzin—who, being an Aztec noble and a featherworker, considered a provincial squire turned soldier to be of a class beneath his. With cockles. Cockles? asked Cortés. The Indian pointed to the captain’s instep, festooned with a golden buckle and inlaid with mother-of-pearl. Buckles, said the conquistador; shoes with buckles. That’s it.

Naturally, Cortés didn’t buy Huanitzin a pair of shoes stitched with silver thread like his—not only were they monstrously expensive, walking in them was like squeezing one’s toes into a pair of flatirons—but he did buy him good high-heeled boots with tin buckles, and along with them a pair of stockings, a few white shirts, and a pair of black breeches intended for some nobleman’s son that fit the featherworker like a dream.

The Indian accepted the garments as if they were his due—without paying them much attention or thanking him for them—and made one last request of the conquistador before getting to work: Could you also find me some mushrooms? Mushrooms? To see mellifluous things while I’m worrying the king’s drape. It’s called a royal cape, a capón real. I thought that a capon was a bird with its burls cut off. Balls. Not balls, it’s mushrooms I want. Here they would burn us both if they discovered you drunk on mushrooms. I’d hardly be dunked in them, it’s not as if they’re a pond. There are none in Spain. Well then, the royal capón won’t be as mellifluous.

Huanitzin liked his new clothes, though he didn’t think them fitting for a master featherworker who was once again on the grounds of an emperor’s palace, so he used his first Spanish goose feathers to embroider one of the shirts—the one he wore on special occasions—with pineapples that he imagined were the equivalent of the Flanders lions he’d seen worked in gold on Charles V’s cloak. The breeches were sewn down the side seams with bands of white feathers, turning him into a first wild glimpse of mariachi singers to come. The cooks spoiled this tiny man, who inspected their birds’ scrawny necks and armpits in a getup like a saint on parade. When he decided that a fowl was worthy of being plucked, he kneeled over it, took a pair of tiny tweezers from his sash, blew the hair out of his eyes, and defeathered the part of the bird that interested him with maddening care—the cooks knew by now that once he chose a specimen it would have to be moved to the dinner menu because there was no way he’d be done with it before lunch. Hours later, he would return happily to his shop, generally with a harvest of feathers so modest that it hardly filled a soup plate. Sometimes he looked over the birds and found none to be of interest—there was no way to predict which he would judge worthy material for the king’s cape. Other times it happened that there would be no birds cooked that day. When this was the case he still lingered in the kitchen, leaning on the wall so as not to be in the way. He admired the size of the chunks of animal moving on and off the hearth. What is that, he asked every so often. Calf’s liver. He would return to his shop to tell his son that the king was to eat castle adder that night. But what is it? Must be a fat snake that lives in ruined towers, he explained in Nahuatl.