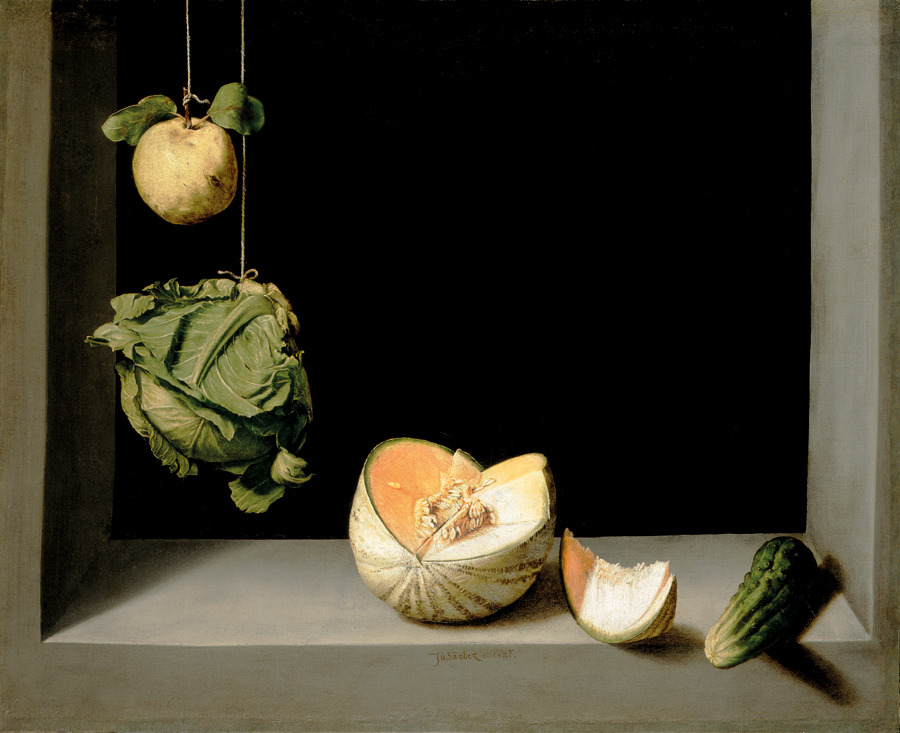 Claire-Louise Bennett on still lifes, ‘the essence of simple things’, and the poetics of space for frieze:

When I was very young, I made drifting lists that were triggered by the things on my bedroom floor, migrated outside to name those things that I imagined inhabited the dark – wolves, moths, fireflies, greying tennis balls tucked beneath black conifers – before turning inwards to tentatively alight upon that strange menagerie of internal phantoms that has been skimming across my marrow since day one. Writing was – and is still, to some degree – a way of linking the inner, the outer and the beyond along the same imaginative continuum. As Bachelard put it: ‘Large issues from small.’ Yet, despite the vibrant poetics that his meditation upon familiar space brings forth, the home and its accoutrements are still routinely thought of in predominantly domestic terms, amounting to nothing more than an environment characterized by habit, drudgery, tameness and unvarying outcomes. Seen from that dour angle, it’s hardly a strata of life that seems worth reporting on. In recent years, visual and performance-art practices have done a great deal to foreground the aesthetic value of the events, tasks and items that constitute daily life. Challenging the hegemony of fine art and its emphasis on beauty, religion and greatness, everyday aesthetics alert us to those myriad responses, from disgust to consummation, that calibrate our day-to-day environments and the activities they are host to. While this is a crucial and exciting turn, I feel that some of the artworks that have emerged from this discourse often present an estranged pastiche of ‘everyday life’, and reinforce generic ideas of the domestic. Too much of the human role is apparent in them, perhaps. I’ve sometimes wondered if it’s people who subdue things, rather than the other way around. Liberated from their customary function, objects regain a marvellous ambivalence which hints at their belonging to a limitless system far more generative than the one they are assigned to through their routine encounters with individuals. An unoccupied stage set has often seemed to me to transmit a greater dramatic charge than the play that comes to pass upon it. Perhaps it is for similar reasons that some of the artworks I like best are still-lifes from the Renaissance period.

The absence of human subject matter in still life meant that, as a genre, it wasn’t held in as high regard as portraiture, landscape or history painting; in my view, it is the very eschewing of a blatantly anthropocentric theme that makes these canvases so singular. And the more stripped down the compositions the better. Among my favourites is a still life, or bodegón, by the Spanish painter Juan Sánchez Cotán. He completed Quince, Cabbage, Melon and Cucumber around 1602, at a time when most artists were exclusively occupied with depicting religious tableaux, battle scenes, royal figures and so on. Here, in this arrestingly austere arrangement, a quince hangs from a thin string at the top-left corner of an apparently paneless window; its outstretched leaves make it look winged and restless, as if at any moment it might take flight and disappear upwards out of the frame. Suspended beneath it is a cabbage, whose downcast aspect brings to mind Cyrano de Bergerac’s defence of vegetable life in his novel A Voyage to the Moon (1657): ‘To massacre a man is not so great a sin as to cut and kill a cabbage, because one day the man will rise again, but the cabbage has no other life to hope for.’ Below, on the unmarked sill, a cleaved melon has come to rest. The seeded surface of its hacked interior is the only area in the painting that is free from shadow; yet, here, unadulterated light seems indecent, intrusive, exposing the disarrayed pips and the dent of the severing blade to disquieting effect. Beside the melon is a slice of itself, one end in the merciful umbra of its bigger portion, the other end rent from its stippled skin. A year or so after he completed the painting, Sánchez Cotán joined a Carthusian monastery, part of a Catholic order whose emphasis on contemplation meant that the monks passed their days in silence and solitude. Perhaps only a painter with the capacity for hermetic spiritual dedication would feel moved to wrench these humble comestibles away from the raucous chaos of a muggy kitchen and present them in isolation. As De Bergerac, writing less than 50 years later, said: ‘Plants, in exclusion of mankind, possess perfect philosophy.

Another Spanish painter who created still lifes that transcend the daily round is Francisco de Zurbarán. It is not surprising to discover that the artist was very much influenced by Sánchez Cotán. As in Sánchez Cotán’s windowsill, the table of his Still Life with Lemons, Oranges and a Rose (1633) is placid and unmarked: there are no traces of human tasks, no nicks in the wood, no stains from previous repasts and neither of the table’s two ends can be seen. There is a similar precise ordering of objects and, like his predecessor, Zurbarán conjures mesmerizing black backdrops that pull our attention through the tangible elements onto an amorphous metaphysical plane. A metal dish of four citrons stands in front of this darkness, the fruit nosing the static air like deracinated moles. On the right is a saucer, upon which a cup of water stands askew, watched by a pale rose poised on the rim. Between both is a basket piled with coy oranges and a sprig of spiky blossom. The light on this arrangement seems to be coming from behind my left shoulder, picking out the protuberant lemons, some of the huddled oranges and one side of the obstinate cup, where it stops. The light does not, or cannot, penetrate the darkness behind; we could be anywhere. I do not consider what hand gathered and organized this produce, nor what mouth will consume it; again, these fruits are not for eating. This is not a slice of life.