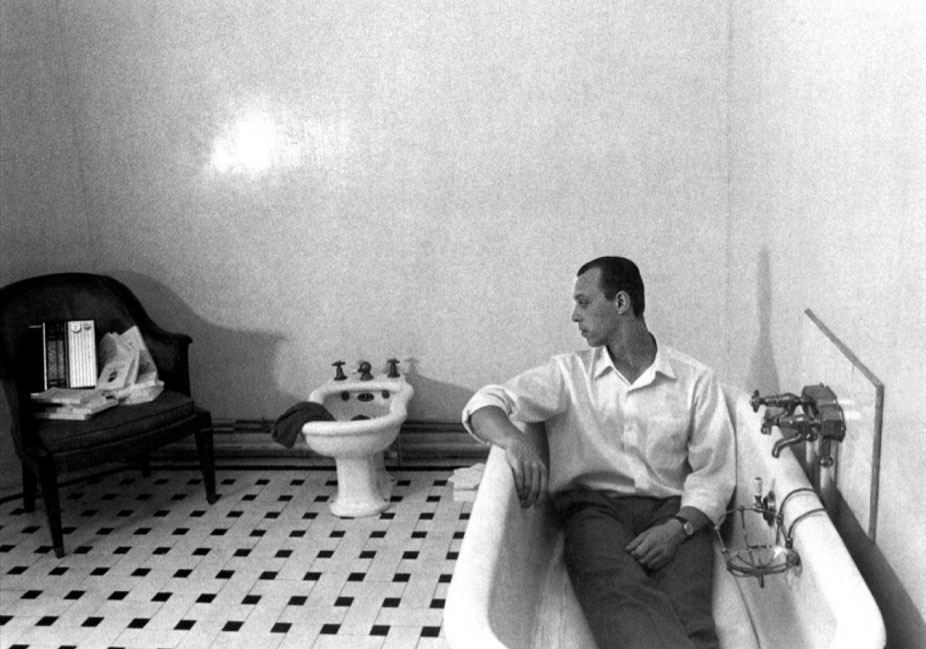 We’re very excited to be publishing Jean-Philippe Toussaint’s essay Football on 11 May this year. In anticipation of this, here’s an excerpt from one of his previous stories, Running Away, originally published in English in 2009 by Dalkey Archive Press, and extracted on KCRW’s website:

Would it ever end with Marie? The summer before we broke up I spent a few weeks in Shanghai, but it wasn’t really a business trip, more a pleasure junket, even if Marie had given me a sort of mission (but I don’t feel like going into details). The day I arrived in Shanghai, Zhang Xiangzhi, a business associate of Marie’s, was there to meet me at the airport. I’d only seen him once before, in Paris, at Marie’s office, but I recognized him immediately, he was talking to a uniformed police officer just past customs. He had to be in his forties, round cheeks, facial features swollen, smooth, copper-colored skin, and he wore very dark sunglasses that seemed too big for his small face. We were waiting at the edge of the baggage carousel for my bag and we’d hardly exchanged a few words in broken English before he handed me a cell phone. Present for you, he told me, which plunged me into a state of extreme bewilderment. I didn’t really understand why he felt the need to give me a cell phone, a used cell phone, rather ugly, dull gray, without packaging or instructions. To keep an eye on me, be able to locate me at any time, watch my every move? I don’t know. I followed him silently through the airport terminal, and I felt a sense of unease, heightened by jet lag and the tension that comes with arriving in an unknown city.

On exiting the airport, Zhang Xiangzhi made a quick gesture with his hand and a shiny new gray Mercedes slowly rolled up to us. He got in behind the wheel, sending the driver, a young guy with a fluid, scarcely noticeable presence, to the back seat after having placed my bag in the trunk. Seated at the wheel, Zhang Xiangzhi invited me to join him in the front, and I sat beside him on a comfortable, cream-leather seat with armrests and a new-car scent while he tried to adjust the air conditioning, which, after fiddling with a digital touch pad, began humming softly in the vehicle. I handed him the manila envelope that Marie had asked me to give him (which contained twenty-five thousand dollars cash). He opened it, thumbed quickly through the bundles to count the bills, then resealed the envelope before putting it in his back pocket. He fastened his seat belt and we left the airport slowly to get on the freeway in the direction of Shanghai. We didn’t say a word, he didn’t speak French and his English was poor. He wore a gray short-sleeved shirt and a small gold chain with a pendant in the shape of a stylized claw or dragon’s talon around his neck. I still had the cell phone he had given me, it was on my lap, I didn’t know what to do with it or why it had even been offered to me in the first place (just a Welcome to China gift?). I was aware of the fact that Zhang Xiangzhi had been overseeing Marie’s real-estate investments in China for a few years now, some possibly dishonest and illicit activities, renting out and selling commercial leases, purchasing building space in rundown areas, the whole thing probably tainted by corruption and all sorts of clandestine exchanges of money. Since her first bouts of success in Asia, in Korea and Japan, Marie had set up shop in Hong Kong and Beijing and had been hoping to acquire new storefronts in Shanghai and in the south of China, with plans underway to open branches in Shenzhen and Guangzhou. For the time being, however, I hadn’t heard anything about Zhang Xiangzhi being involved in organized crime.

On arriving at the Hansen Hotel, where a room had been reserved for me, Zhang Xiangzhi parked the Mercedes in the hotel’s private interior courtyard and went to grab my bag from the trunk before ushering me all the way to the front desk. He hadn’t been involved in any way with reserving the room, which was done from Paris by a travel agency (a one-week, fully planned “escapade” with hotel and flight included, to which I added an extra week of vacation for my own enjoyment), but now he was seeing to everything, having me step aside as he took care of the arrangements. He had me wait on a couch while he went alone to the front desk to check me in. I sat there waiting in the lobby, next to a depressing display of dusty plants withering in flowerpots, and I watched him listlessly as he filled out my registration information. At one point he walked over to me, hurried, concerned, his hand reaching out anxiously, to ask me for my passport. He walked back to the front desk and I kept an eye on my passport, watching it with some concern as it passed from hand to hand, worried that I might see it spirited out of the hands of one of the numerous employees shuffling behind the counter. After a few more minutes of waiting, Zhang Xiangzhi came back over to me with the magnetic key card for my room. It was enclosed in a red and white case adorned with carefully formed Chinese characters, but he didn’t give it to me, he kept it in his hand. He grabbed my bag and invited me to follow him, and we headed to the elevators to go up to my room.

It was a three-star hotel, clean and quiet, we didn’t see a single person on our floor, I followed Zhang Xiangzhi down a long deserted hall, an abandoned housekeeping cart blocked our way. Zhang Xiangzhi slid the magnetic card through the lock and we entered my room (very dark, the curtains were drawn). I fiddled with the light at the door but the dimmer switch turned without effect. I tried to turn on the bedside lamp, but there was no electricity in the room. Zhang Xiangzhi pointed at a little receptacle on the wall next to the door in which one was meant to insert the key card in order to turn on the electricity. To demonstrate, he slowly inserted the card into the little slot and all the lights lit up at once, in the closet as well as the bathroom, the air conditioner loudly began to emit cool air, and the bathroom fan turned on. Zhang Xiangzhi went to open the curtains and stood at the window for a moment, pensive, looking at the new Mercedes parked in the courtyard below. Then he turned back around, as if to leave-or so I thought. He sat down in the armchair, crossed his legs, and took out his own cell phone, and, without appearing to be inconvenienced in any way by my presence (I was standing in the middle of the room, exhausted from my trip, I wanted to shower and stretch out on the bed) he began dialing a number, closely following the instructions on a blue phone card that had the letters “IP” written on it, followed by various codes and Chinese characters. He needed to start over a couple of times before getting it right, and then, gesturing emphatically in my direction, he called me over, had me run to his side, so that he could hand me the phone. I didn’t know what to say, where to speak, to whom or in what language I would be speaking, before hearing a female voice say allo, apparently in French, allo, she repeated.Allo, I finally said. Allo, she said. Our confusion was now complete (I was beginning to feel uneasy). Marie? With his sharp and focused eyes aimed at me, Zhang Xiangzhi was prodding me to talk, assuring me that it was Marie on the line-Marie, Marie, he was repeating while pointing at the phone-and I finally understood that he had dialed Marie’s number in Paris (her office number, the only one that he had) and that I was talking to a secretary at the haute-couture house Let’s Go Go Go. But I didn’t feel like talking to Marie right now, not at all, especially in front of Zhang Xiangzhi. Feeling more and more uneasy, I wanted to hang up, but I didn’t know which button to push or how to stop the conversation, so I quickly tossed him the phone as though it were white-hot. He hung it up, brusquely snapped it shut, pensive. He retrieved it from his lap, brushed it on the back of his hand as if to dust it off, and leaned forward to hand it to me without leaving his chair.For you, he told me, and he explained to me in English that, if I wanted to make a call, I should always use this card, dial 17910, then 2 for instructions in English (1 for Mandarin, if I preferred), the card’s number, followed by his PIN, 4447, then 00 for international, 33 for France, and then the number itself, etc. Understand? he asked. I said yes, more or less (maybe not all the details, but I got the gist of it). If I wanted to make a call, I should always use this card-always, he insisted-and, pointing to the room’s old landline phone on the bedside table, he shook his finger, saying no forcefully, like an order or command. No, he said. Understand? No. Never. Very expensive, he said, very very expensive.

In the following days, Zhang Xiangzhi called me only once or twice on the cell phone he had given me to see how I was doing and to invite me to lunch. Since my arrival, I had spent most of my time alone in Shanghai, not doing much, not meeting anyone. I’d walk around the city, eating at random times and places, seasoned kidney skewers on street corners, burning hot bowls of noodles in tiny hole-in-the-wall places packed with people, sometimes more elaborate meals in luxurious hotel restaurants, slowly working my way through the menus in deserted kitsch dining halls. In the afternoon, I’d take a nap in my room, not going back out until nightfall when it would get a little cooler. I’d go for a walk in the mild night, lost in thought, strolling alongside the multicolored neon-lit shops of Nanjing Road, indifferent to the noise and constant activity. Drawn to the river, I’d always end up in the Bund, welcomed by its maritime atmosphere and sea breeze. I’d cross through the underground passageway and amble aimlessly along the river, letting my eyes fall upon the row of old European buildings whose green lights, reflected on the wavy water of the Huangpu, projected emerald halos in the night. From the other bank of the river, beyond the flow littered with vegetable waste stagnating in the darkness, beyond the chunks of mud floating on the surface of the water and the algae magically held in place by an invisible undertow, the skyscrapers of Pudong traced a futuristic line in the sky as fateful as the lines that mark our palms, punctuated by the distinctive sphere of the Oriental Pearl, and, further along on the right, as if in retreat, modest and hardly lit up, the discreet majesty of the Jin Mao Tower. Looking out at the water, pensive, I was captivated by the river’s dark and wavy surface, and in a state of dreamlike melancholy-as often happens when the thought of love is met with the spectacle of dark water in the night-I was thinking about Marie.

Was it already a lost cause with Marie? And what could I have known about it then?